Justin Bruns has been employed by the New Bremen Police Department since 2010. Justin served the department as a part-time patrolman from 2010-2015. In 2015, he became a full-time patrolman. In addition, he is the first K-9 handler for the Village of New Bremen.

Justin and his wife live in New Bremen along with their daughter. Justin and his wife are expecting a baby boy, who is anticipated to arrive in November. The Bruns family also includes two dogs as well as Doc, the K-9 patrol dog.

In Justin’s spare time he enjoys hanging out with family and friends, his hobbies include hunting and fishing.

When asked why he likes working for the New Bremen Police Department Justin commented that he enjoys helping the community and talking to residents. He also enjoys the people he works with.

Some of Justin’s standout moments include conducting a search warrant on a drug house as well as coming to work every day with his K-9 partner and the work that entails. 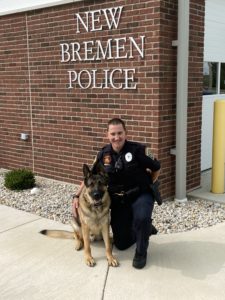